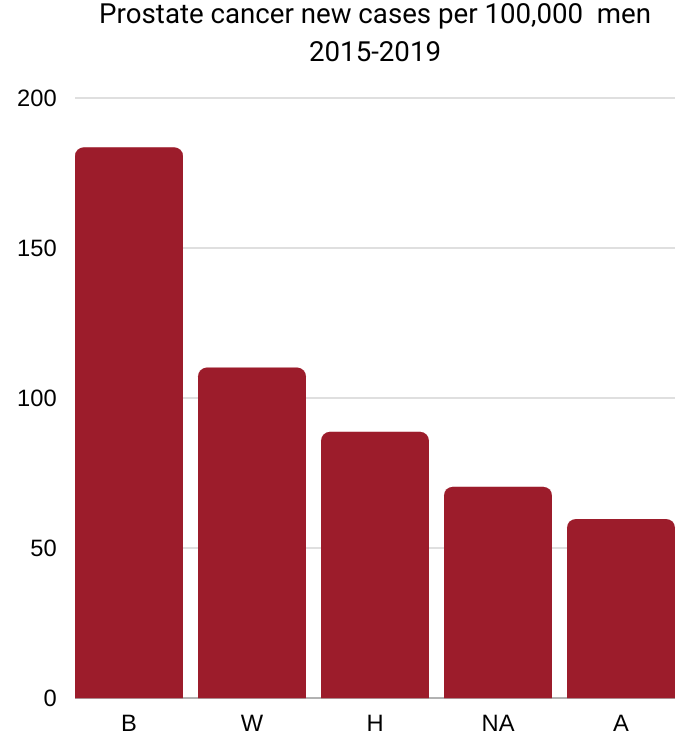 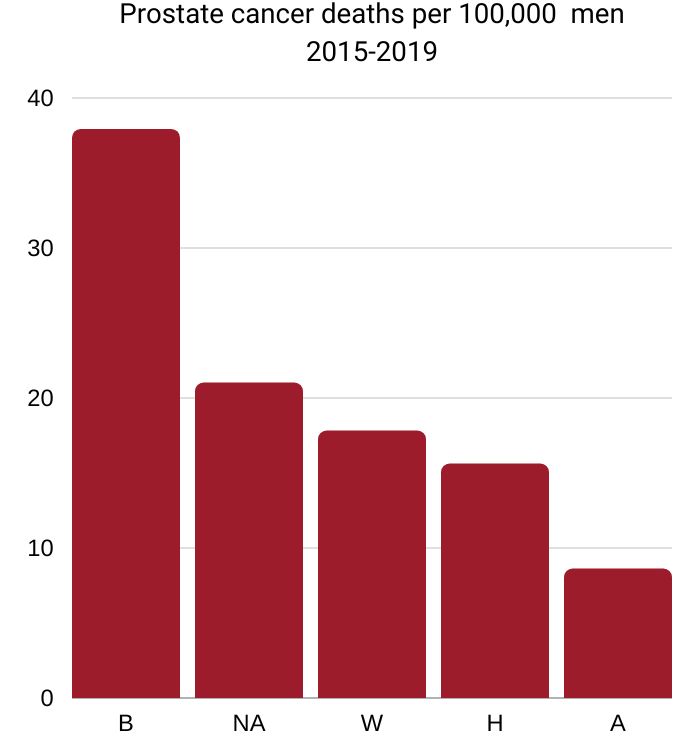 Similar to White men, incidence rates in Black men increased sharply from 1989 to 1992, then declined until the early 2010s, reflecting changes in use of the prostate-specific antigen (PSA) blood test. Rates were stable in Black and White men from 2014 through 2018, although this trend reflects localized-stage disease, which accounts for the majority of cases; rates for regional- and distant-stage disease increased during this time period by about 5% per year in Black and White men. The upturn in advanced disease likely reflects the reduction in screening following the US Preventive Services Task Force (USPSTF) 2012 recommendation against routine PSA testing. In 2018 the USPSTF revised the guideline again to recommend informed decision making among men ages 55-69 years.
Source: American Cancer Society. Cancer Facts & Figures for African American/Black People 2022-2024.

Prostate cancer is projected to account for 37 percent of all new cancer diagnoses in Black men in 2022, making it the most common cancer among Black men. The rate of prostate cancer incidence during 2014-2018 was 73 percent higher in Black men compared to White men, a disparity that has persisted for decades.
Source: American Association for Cancer Research Cancer Disparities Progress Report 2022.

Hispanic men.  Prostate cancer is the most commonly diagnosed cancer among Hispanic men. Among the major racial/ethnic groups in the United States, Hispanic men have intermediate prostate cancer incidence rates that are slightly lower than those in whites. Prostate cancer incidence rates decreased by about 6% per year in both Hispanics and whites from 2006 through 2015, although declines have accelerated in both groups in recent years, likely reflecting a 2008   recommendation against routine PSA screening in men 75 and older and a subsequent 2012 recommendation against routine PSA screening in all men.
Source: Cancer Facts & Figures for Hispanics/Latinos 2018-2020.  Atlanta: American Cancer Society, 2018

Hispanics have a lower rate of prostate cancer compared with Whites. Because of the heterogeneity of the Hispanic population, the risk for different cancer types varies widely depending upon country or region of ancestral origin. Prostate cancer incidence rates among men in Puerto Rico were nearly 70 percent higher than among Hispanic men in mainland U.S.
Source: American Association for Cancer Research Cancer Disparities Progress Report 2022.

Native Hawaiians. Native Hawaiian men had the lowest incidence of but the highest mortality from prostate cancer than any other racial or ethnic group in Hawaii during 2012-2016, the most recent period for which such data are available.
Source: American Association for Cancer Research Cancer Disparities Progress Report 2022.

Black and Hispanic men are under-represented in clinical trials that look at biomarkers which can help identify appropriate personalized treatments. White and Asian men are over-represented in these trials.
Source: “Racial and Ethnic Disparities Among Participants in Precision Oncology Clinical Studies” by Christopher M. Aldrighetti et al. (November 8, 2021).

Black men. The overall 5-year relative survival rate for prostate cancer is 96% for Black men and 98% for White men. Eighty-four percent of all prostate cancers among Black men are diagnosed at a local or regional stage, for which the 5-year relative survival rate approaches 100%. When prostate cancer is diagnosed at a distant stage, 5-year survival drops to 30% in both Black and White men.
Source: American Cancer Society. Cancer Facts & Figures for African American/Black People 2022-2024.

Black men. Prostate cancer is the second-leading cause of cancer death in Black men, with an estimated 6,040 deaths expected in 2022. Black men have the highest death rate for prostate cancer of any racial or ethnic group in the US, 2 times higher than White men. Although there is some evidence that aggressive prostate cancer is more common in Black men, the larger disparity for mortality than incidence largely reflects less access to high-quality treatment.

The prostate cancer death rate in Black men has dropped by more than 50%, from a peak of 82.1 deaths per 100,000 in 1993 to 36.6 deaths per 100,000 in 2019, similar to the decline among White men. Factors that have likely contributed to the decrease include early detection through PSA testing, improved surgical and radiologic treatment, and the use of hormonal therapy for advanced-stage disease. However, rapid declines since the mid-1990s have slowed in recent years, likely reflecting the uptick in advanced disease. From 2015 to 2019, the death rate declined by 1.3% per year among Black men and by 0.7% per year among White men.
Source: American Cancer Society. Cancer Facts & Figures for African American/Black People 2022-2024.

During 2015-2019, the most recent years for which such data are available, prostate cancer death rates declined every year by 1.3 percent for Black men compared to 0.7 percent for White men. This favorable trend indicates a narrowing of the disparity between the two populations, but much remains to be done. Black men continue to have the highest death rate for prostate cancer compared to any racial or ethnic group in the U.S.; during 2015-2019, Black men were twice as likely to die from prostate cancer compared to White men.
Source: American Association for Cancer Research Cancer Disparities Progress Report 2022.

Hispanic men.  The death rate during 2012-2016 was slightly lower in Hispanic men than in white men. From 2007 to 2016, the death rate decreased among Hispanics by 2.7% per year and among whites by 2.1% per year. A study in Florida reported substantial variation within the Hispanic subpopulations, with rates among Dominicans twice those of Mexicans, Puerto Ricans, and non-Hispanic whites.
Source: American Cancer Society. Cancer Facts & Figures for Hispanics/Latinos 2018-2020.  Atlanta: American Cancer Society, 2018

Back to top
Menu