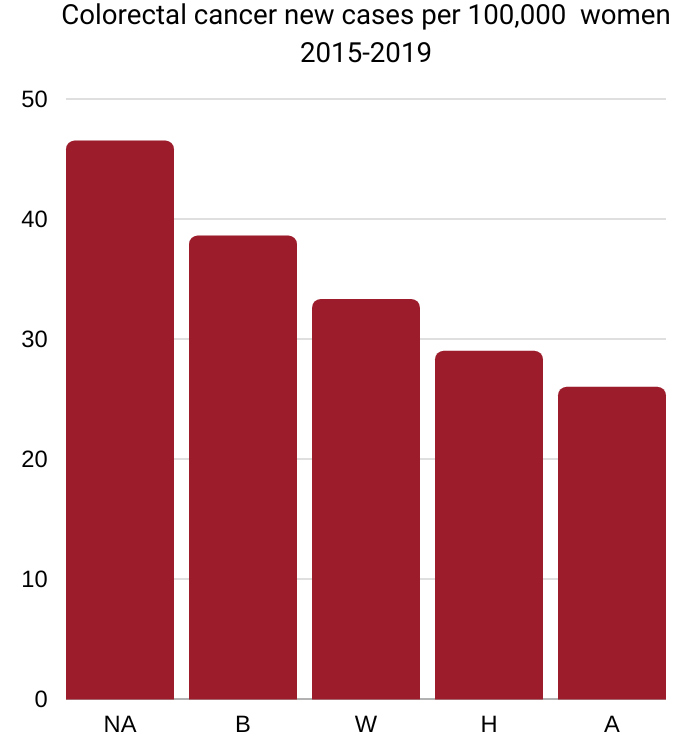 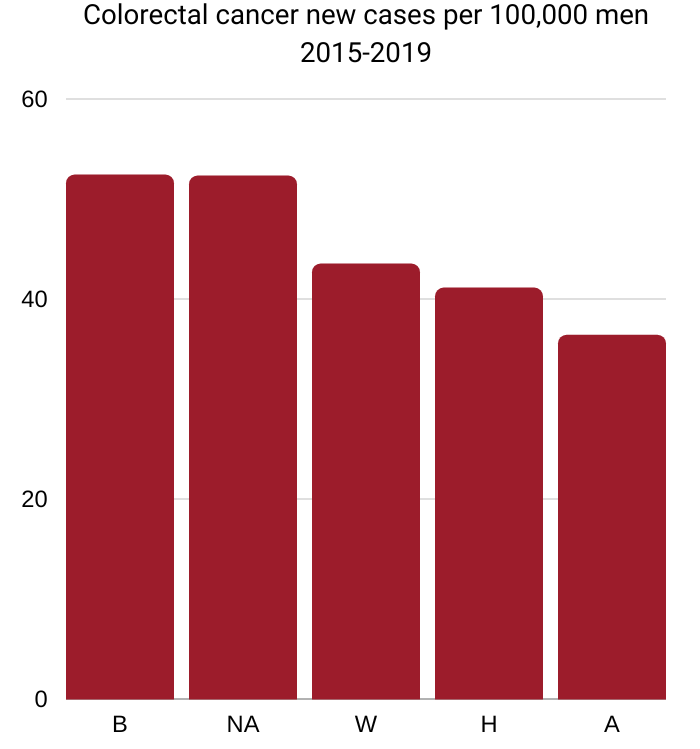 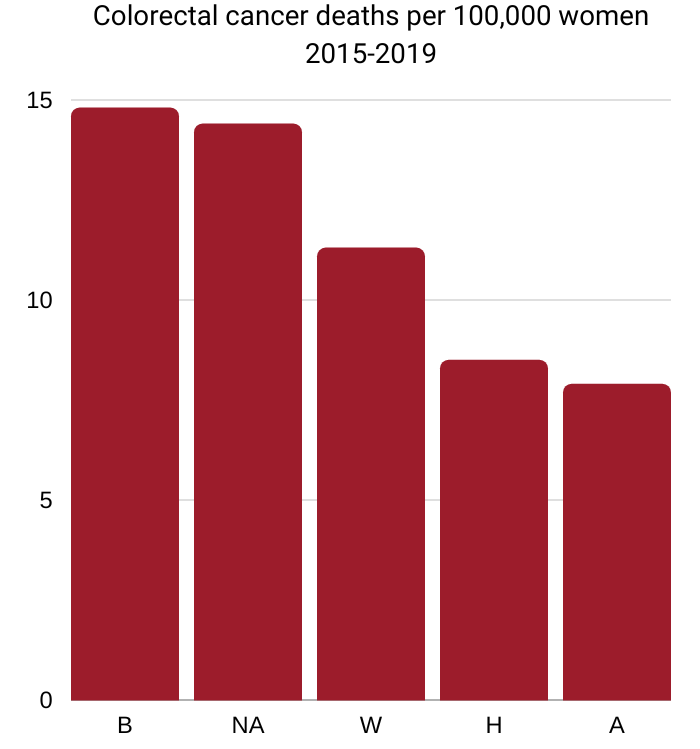 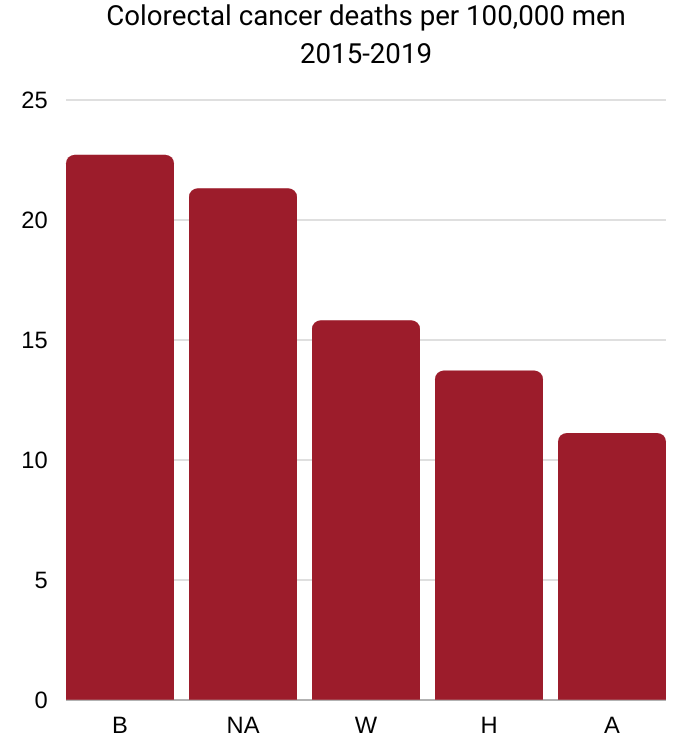 The incidence was historically higher in White people. The crossover occurred in the early 1990s because of changing patterns in risk factors and slower dissemination of screening among Black people. From 2009 to 2018, incidence rates for colorectal cancer decreased by about 3% per year among Black people versus 2% per year among White people. This masks the increasing incidence among people younger than 50 years of age, which is much steeper in White people (2% per year) than in Black people (0.5% per year).
Source: American Cancer Society. Cancer Facts & Figures for African American/Black People 2022-2024.

For early-onset colorectal cancer, the steepest increase is among Whites and American Indians and Alaska Natives. As a result, incidence rates in Whites ages 20-49 years are now equivalent to those in Blacks, despite being 40% higher in Blacks during 1995-1996.
Source: American Cancer Society. Colorectal Cancer Facts & Figures 2020-2022. Atlanta: American Cancer Society; 2020.

During 2014-2018, Black people had the highest incidence of colorectal cancer in the U.S. compared to any other racial or ethnic minority group, and the incidence was nearly 15 percent higher compared to White people.

Even though the incidence rates are declining at a faster pace among the overall Black population compared to the overall White population (three versus two percent annual decline from 2009 to 2018, respectively), it is concerning that among individuals who are younger than 50 years of age the yearly decline for the same period was four times lower in Black people compared to White people.
Source: American Association for Cancer Research Cancer Disparities Progress Report 2022.

Hispanic men and women.  Colorectal cancer incidence rates among Hispanics are 7% lower for men and 16% lower for women than for White men and women, and have been declining since at least the mid-1990s. From 2006 to 2015, incidence rates decreased by 1.6% annually among Hispanics, similar to trends among Whites, although rates in recent years may be leveling off among women. Notably, incidence rates are not declining in all states; for example, rates remain stable among Hispanic men in California, possibly in part due to underutilization of screening.
Source: American Cancer Society. Cancer Facts & Figures for Hispanics/Latinos 2018-2020. Atlanta: American Cancer Society, 2018

American Indian/Alaska Native.  Alaska Natives have the highest colorectal cancer incidence rates in the US. Colorectal cancer has been the most commonly diagnosed cancer in Alaska Natives since the early 1970s for reasons that are unknown, but may include a higher prevalence of risk factors, such as a diet high in animal fat and low in fruits and vegetables, vitamin D deficiency, smoking, obesity, and diabetes.
Source: American Cancer Society. Colorectal Cancer Facts & Figures 2020-2022.

Early-onset colorectal cancer (diagnosed in patients under age 50) has increased by 2.3% annually over the last two decades. These patients are more likely to be diagnosed with stage 4 (advanced) cancer.

Black men and women. Blacks are more likely than Whites to be diagnosed with early-onset colorectal cancer and to have worse outcomes and shorter average survival times than White patients (58 vs 67 months), even with private insurance and in communities with higher income and education status.

Hispanic men and women. Hispanics are more likely than Whites to be diagnosed with early-onset colorectal cancer, but have longer average survival times (92 vs 67 months) than White patients.

Unfavorable tumor characteristics are estimated to account for 26% of the black-white survival disparity in patients younger than age 65, but 40%-50% in older patients. For example, black patients are about 4 times more likely to be diagnosed with proximal (right-sided) tumors, which have less favorable outcomes than whites.
Source: American Cancer Society. Cancer Facts & Figures for African Americans 2019-2021. Atlanta: American Cancer Society, 2019.

Blacks and Hispanics are under-represented in clinical trials that look at biomarkers which can help identify appropriate personalized treatments. Whites are over-represented in these trials.
Source: “Racial and Ethnic Disparities Among Participants in Precision Oncology Clinical Studies” by Christopher M. Aldrighetti et al. (November 8, 2021).

Black men and women. The 5-year relative survival rates for colorectal cancer improved from 45% in 1975-1977 to 59% in 2011-2017 among Black people versus 50% to 65% among White people. Some of this survival disparity is due to later-stage diagnosis among Black people, although this gap has narrowed: 34% of colorectal cancers in Black people are diagnosed at a localized stage compared to 35% in White people. Five-year relative survival rates remain lower in Black than in White patients for each stage of diagnosis. Racial disparities in stage-specific survival largely reflect differences in treatment, comorbidities, and tumor characteristics.
Source: American Cancer Society. Cancer Facts & Figures for African American/Black People 2022-2024.

Death rates in Whites began a slow decline in the early 1970s that accelerated over time. In contrast, death rates in Blacks increased from the early 1970s until 1990, then decreased sluggishly during the 1990s before matching the decline in whites in the early 2000s. As a result of these divergent trends, although death rates in Blacks were 10% lower than those in Whites in the early 1970s, they were almost 50% higher in 2005. The widening racial disparity was largely driven by trends for distant-stage disease, which declined in Whites while remaining stable in Blacks through the mid-2000s. About half of the racial disparity in mortality is attributed to a combination of less screening and lower stage-specific survival rates among blacks.
Source: American Cancer Society. Colorectal Cancer Facts & Figures 2020-2022. Atlanta: American Cancer Society; 2020.

This gap is two times larger than the disparity for incidence but has begun to shrink in recent years because of steeper declines in death rates from 2010 to 2019 in Black people (about 3% per year) than in White people (about 2% per year). One study estimated that 19% of the racial disparity in mortality can be attributed to less screening and 36% to lower stage-specific survival among Black people.
Source: American Cancer Society. Cancer Facts & Figures for African American/Black People 2022-2024.

There is a major disparity between Black and White populations in mortality rates for colorectal cancer, which are 44 and 31 percent higher in Black men and women, respectively, compared to White men and women.
Source: American Association for Cancer Research Cancer Disparities Progress Report 2022.

Hispanic men and women.  Colorectal cancer is the third-leading cause of cancer death among both Hispanic men and women. Hispanic men and women have colorectal cancer death rates that are 13% and 26% lower, respectively, than those in whites, although there are striking disparities by geography and place of birth. For example, within California, the death rate in US-born Mexican men is nearly double that of their foreign-born counterparts. From 2007 to 2016, death rates decreased by about 2% per year among Hispanics, similar to declines among whites.
Source: American Cancer Society. Cancer Facts & Figures for Hispanics/Latinos 2018-2020.  Atlanta: American Cancer Society, 2018 One in two Hispanic adults between 50 and 75 years of age are not getting tested as recommended, putting Hispanics at increased risk for advanced-stage colon cancer.

Because of lower screening rates, colon cancer causes about eleven percent of cancer deaths among Hispanic males and nine percent of Hispanic females.

Read more at “Hispanics Are Less Likely to Get Screened for Colon Cancer” on the Stop Colon Cancer Now website (July 1, 2021)

“Colorectal cancer is the second leading cause of cancer death in Puerto Rico,” says Tristana Vásquez who was diagnosed at age 38 with colon cancer that had spread to her lungs .

“I do think there is an apprehension in the Hispanic community, specifically Puerto Rico, to not get screened when it’s preventable. Most cases of this disease are preventable. So it’s important not to be afraid.”

“We tend to just feel unwell and then go to the doctor when we cannot do anything else. Knowing whatever you have and attacking it and dealing with it at an early stage, it’s going to get better results.”

A 5-minute video from the American Association for Cancer Research

Why are Hispanics More Likely to Be Diagnosed with Late-Stage Colorectal Cancer? “I think the number one contributing factor is they’re ashamed of seeking advice for changing bowel habits or for any type of symptoms,” says Roberto Rodriguez-Ruesga, MD, a colorectal surgeon in Dallas (pictured above).

“They just put up with symptoms until it gets to a point that is unbearable. Unfortunately, by then, it’s too late.

“Colorectal cancer has been rising among people under the age of 50 at a rate of about 2% per year since the mid 1990s,” says Kimmie Ng, Director of the Young-Onset Colorectal Cancer Center at the Dana Farber Cancer.

“New data estimate that colorectal cancer will actually become the top cause of cancer death in young people aged 20-49 by the year 2030.

We do not know why this is happening, but we do know that the vast majority do not have a genetic syndrome or a family history of colorectal cancer, and most of the time they don’t have any of the known risk factors for colorectal cancer either.

Therefore, all individuals at average risk of colorectal cancer should start their screening at age 45.”

A 2-minute video from the Colorectal Cancer Alliance (2022)

Why is early-onset colorectal cancer more common in Blacks? “The exact cause of differences observed based on race and ethnicity are unclear,” say gastro-enterologists Swati Patel, MD (left), of the University of Colorado School of Medicine and Jordan Karlitz, MD.

“It is certainly well-established that under-represented groups have inequitable access to health care and face structural racism that may disproportionately impact delays in diagnosis.

There are also possible biologic hypotheses, such as behavior and environmental changes that affect the way your genes work that cause colons among Black individuals to potentially age faster or microbiome differences that may differentially predispose individuals to cancer.

There is a substantial amount of research being done around race and ethnicity, but the immediate mandate for all of us is to expand screening and health services to all populations and to dedicate ourselves to dismantling inequities.”

Source: “Younger Patients Increasingly Being Diagnosed with Late-Stage Colorectal Cancer” by Rachel Sauer on the University of Colorado School of Medicine website (March 23, 2022) From a survey of 1089 early-onset colorectal cancer patients, survivors and caregivers:

Back to top
Menu